Some years ago we decided to start naming some of our products by using names from wrecks in our nearby region. One of them was the ANTARES which from a diving point of view has a long history connected to the divers in our own neighborhood. The wreck of the S/S ANTARES is located close to Lysekil and the stories told through generations gave us inspiration to dive it and bring the story to you. 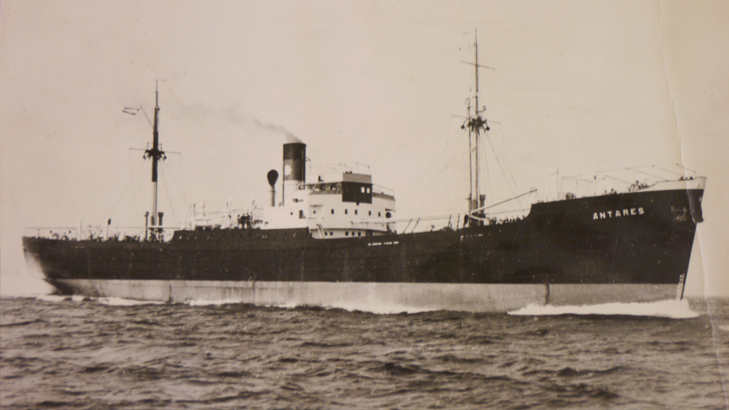 On April 9, the Germans staged Operation Weserübung, the invasion of Denmark and Norway. The aim of the operation was to gain control of the ports along the coast of Norway, e.g. to secure the iron ore shipments from Kiruna, which was shipped from Narvik and on down to Germany beyond Denmark. The iron ore was used in the German war industry. Another reason for the invasion of Norway was that the Germans wanted to increase their area from which they could attack Britain. A third reason was to guard the fairways between Murmansk in Russia and the west. In preparation for the invasion many vessels passed the Swedish West Coast with troops, military equipment, fuel and supplies through the Kattegat on their way to Norway. After the invasion these transports continued to and from Norway through the Kattegat.

The invasion of Norway did not come as a surprise to the British who had long since known that the Germans remade  merchant vessels into troop and transport ships and a variety of German ships gathered in the ports of the Baltic Sea and in the estuary of Elbe. However, it was not known at the moment that it was Norway that the Germans intended to invade. After the invasion of Norway Britain's Prime Minister Churchill emphasized that British submarines already had sunk a number of German troops and transport ships and assured that soon would all German ships in the Kattegat and Skagerrak be sunk. The Germans had previously been able to move freely within the Norwegian and Swedish territorial waters due to countries' neutrality. Churchill pointed out that the Norwegian corridor no longer existed after the German invasion. To watch the ore undisturbed being shipped to Germany to become grenades against England and France were not accepted and also the rumours that the Germans had used ore ships to send troops to Norway.

Antares leaves for Norway
Antares was initially built for AG Bremen but was taken over by the Kriegsmarine when World War II started.
In early April 1940 Antares was in Stettin, Poland, where coal, horses, soldiers, off-road vehicles, trucks, guns, ammunition, motorcycles, and miscellaneous supplies where loaded onboard the ship.  Its destination was Oslo in Norway.  At 2 am on April 7 1940 Antares left Stettin along with the convoy Seetransportstaffel destined for Oslo, Norway. To avoid enemy ships the convoy sailed near the Swedish West Coast.

The Antares takes hit and sinks
The British submarine HMS Sunfish had, after receiving information that a German convoy was heading north through the Kattegat, been waiting at Måseskär. At about 8 pm on April 10 1940 the sound of the propeller on Antares was heard onboard the HMS Sunfish.  Shortly after two torpedoes was fired against the Antares. One torpedo hit the engine room. The ship began to sink and the men on board tried to get themselves into the lifeboats but because of the panic situation several lifeboats capsized and many men jumped overboard.

Two German minesweepers and a Swedish vessel, Skagerrak, who were in the vicinity, came to the rescue and they picked up survivors while the Germans attacked HMS Sunfish with depth charges. From the island Öckerö, locals had witnessed as the torpedo hit its target and how the Antares quickly sank to the bottom. From the town of Lysekil the convoy had been observed and vessels moving north near the Swedish coast had been seen. From the island Käringön, life and pilot boats were sent out to assist the search and rescue for survivors but due to firing they could not go to far out. At 9 pm the firing ceased and the rescue boats came out to wreck area where a lot of corpses floated in the water. Search lights from the vessels swept for several hours but only 34 people were rescued. After hearing the survivors it was revealed that about 200 people had been on board when the ship sank.

Diving the ANTARES is a challenging task because of its position often exposed to strong current and poor visibility. The wreck rests at a depth of 53 meters on a bottom of mud. ANTARES is despite more than 70 years on the ocean floor a wreck that offers exciting views, spaces and finds for divers with proper training and transportation. Some divers have been led to believe that the entire hull would have fallen apart over the years but our dives have given us a different picture. The superstructure has collapsed and the wreck lies with the list to port side. The hull is intact with exception from the area of the torpedo hit in the engine section. During its last mission, ANTARES was loaded with troops, artillery, trucks, motorcycles, communication equipment, weapons and more. There are stories told from the divers that discovered the wreck back in 1965 that there was at least one “Panzer tank” (type, unidentified) in one of the cargo bays, something that we have not been able to find during recent dives since some sections have disappeared into the mud. During our explorations we never came across any human remains but the atmosphere tells the true story of the WWII event. When moving into the cargo bays and lower sections of the hull you will find large amounts of rifles, ammunition, trucks, motorcycles and helmets. Poor visibility and debris makes it a bit of a challenge to navigate and it is easy to get stuck in wires, fishing equipment and fallen steel plates.

During our dives at the wreck site with "Optimala dyk" in 2013, both open circuit diving equipment as well as rebreathers have been used. An issue that was worrying us during our dives was all the fishing nets of various kinds that was put into the water in our eventual drift decompression direction. We managed to always return to the surface line and stick to it during decompression undependant on the current.

The ANTARES dive site is a dangerous place for divers without proper training and equipment. There are numerous risk factors to take in consideration before diving at the site. The wreck itself is full of rubble, fishing nets, wires, loose steel plates and a lot of heavy equipment that might collapse if handled incorrect. Diving with open circuit equipment will create large amount of gas bubbles with lift capacity that will increase the risks while diving inside of the wreck. The mud inside of the wreck will easily get airborne and damage the visibility which will further increase the risk.

Except for this we really find the ANTARES to be an interesting wreck as it still seems to hide some of its secrets told by the first divers that went down there on air supply back in the 60´s. We have met some of the divers in the "old team" and our intention is to be able of telling some of the good stories and show some of the images from that period. 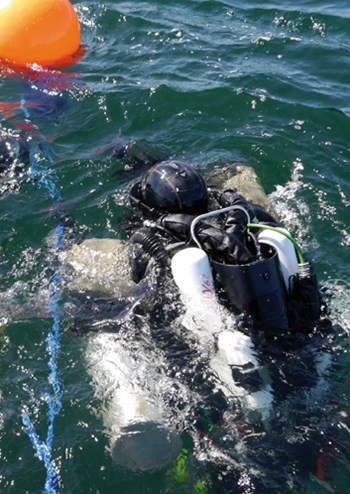